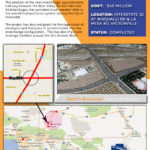 The High Desert population grew exponentially in the last real estate boom and now infrastructure improvements are being established in an effort to compensate for the continued growth of the region.  The new Interchange at I-15 Freeway and Nisqualli/La Mesa Rds in Victorville was completed in 2013 with a price tag of about $45 Million.  Frontage roads were also realigned during this project and regional traffic flow has improved considerably.