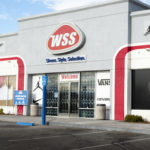 Kursch Group is pleased to announce that WSS Shoes has renewed their lease for their location in Victorville at 15152 Bear Valley Road. The shoe company has realized great success at this store since opening their doors in 2012, taking over the former Hollywood Video building. WSS Shoes have opened 32 more stores since then, including expanding into Arizona and Nevada bringing their total up to 76 stores throughout the southwest! Much of their success is attributed to their business choice in serving the needs of the community with primary focus on families in urban working-class areas.